Redheads get a lot of flak when it comes to comedy nowadays. Gingers are looked at in awe or ire by many. But if you’re a redhead or raising a redhead, you know that they often have very striking features and are quite a rare beauty.

Only 2% of the population across the globe have red hair. What most don’t know is that there are some pretty unique genetic advantages that these beautiful fiery-haired individuals get to enjoy. Don’t believe us. Let’s take a look at the benefits of being a redhead and why you got so lucky!

Redheads: Some Scientific Reasons for Those Fiery Locks

Though they are the core of many jokes in entertainment throughout the centuries, redheads have been persecuted pretty mercilessly. Redheads have had it rough, from being suspected of turning into vampires after death to having no souls. Through scientific studies and societal advancements, those beliefs and other strange ones have gone the way of the dinosaurs.

There are some very interesting scientific reasons why one ends up with red hair. All our hair colors are determined by the type of melanin our hair follicles produce. With red hair, one certain pigment is greater than the other, and that is because of a gene mutation. This mutation is said to have developed in the north’s colder, darker climates.

Flaming Facts: Benefits of Being a Redhead 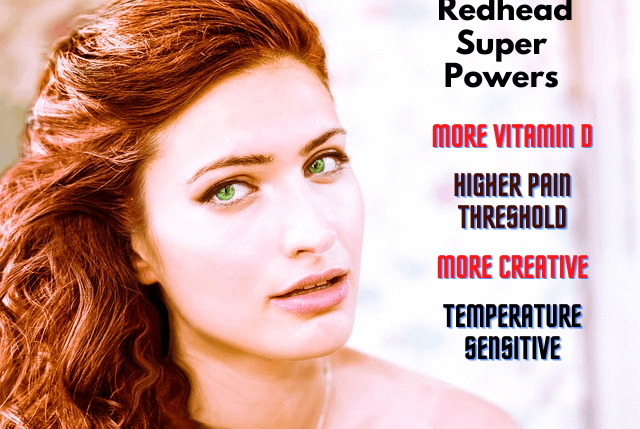 Understanding the why still doesn’t allow us to really understand these genetic advantages that redheads are gifted with. So in order to give you a little insight, we thought we’d take a look at several major benefits of being a redhead:

Vitamin D has a wealth of different benefits. As our bodies absorb that vitamin, it helps our system be able to retain calcium and phosphorus. These minerals are important in bone health. On top of that, it can help decrease cancer cell growth and help with infections and inflammation.

So it sounds pretty important, right? It is, and for many of us, it’s very troubling to get enough vitamin D. But, for redheads, they’re able to create their own vitamin D in a rather short time frame. That means that because they can create their own, they are less likely to deal with things like arthritis and diabetes.

Able to Take the Pain

Nobody likes to be in pain. Even with that being said, we all experience it at some point, and some people are better able to handle it than others. Many studies have shown why people have more pain thresholds than others.

One of those just so happened to be in regards to redheads. A study at the University of Louisville showed that redheads tend to have up to 25% higher pain threshold.

“Classic anesthesia literature has documented that redheads require more anesthesia,” she says. “In addition, there is recent evidence that redheads are more tolerant to local anesthetics and more sensitive to opioids.”

When they think of red hair, most people are automatically associated with Irish and Scottish-born individuals. Red hair is actually a lot more versatile ethnically than you might think. People with auburn or red highlighted hair can be found in almost every part of the world, like the Ehu people of Polynesia.

This means that though flaming locks are very rare for the population, they’re still not so rare that they can’t cross borders.

Let’s face it, almost all of us have wished for something we don’t have. For those with thinner hair type, having luscious thick locks can be a dream we’ve always had. When one is dealing with red hair, they get just that.

It seems that those with red hair have thicker strands than any other shade of hair color. Though they do have less hair, it seems they still have fuller heads of hair because of its thickness.

It’s always a struggle as the seasons change, and we plummet into freezing cold or scorching heat. For most of us, it’s hard to tell when that’s going to happen; we just have to write it out as we go.

But there have been some studies that have shown that redheads are more sensitive to temperature change. It is thought that the MC1R makes affects temperature detection genes.

This means that they’re able to tell us when things are going to get worse. It also means they will be able to dress appropriately no matter where they are.

For many people, the hardest thing when they begin to age is the fact that they turn gray. There are plenty of ways to hide it, but eventually, gray will pop through, and people will know you’re getting older.

Almost every hair color turns gray at some point. Even blondes will turn into a white, which is their version of gray. But redheads never turn gray. They lose the color’s richness, but they never go gray. Doesn’t that sound amazing?!

But when it comes to having red hair, it is more common for them to be left-handed than any other shade of hair color. This uniqueness only serves to make them more intriguing.

Though it seems like ginger jokes are the theme of many comedy skits, it’s been proven that people like to be entertained by those with red hair. TV commercials utilize this in their favor, with a bulk of the people in them tending to either have red hair or auburn.

There have been studies that have shown that people actually enjoy watching them more. That’s why many advertising agencies utilize redheads in their work.

So you see, it’s been a hard road for redheads throughout the centuries. It seems like they’re finally getting their due. Not only is their hair fuller and more luscious than many other hair colors, but they also have a wealth of pretty cool benefits that come with those flaming red locks. So if you are lucky enough to have been born with red hair, enjoy all those perks!