Hair color is genetically inherited from our parents and often relates to geographic location. There are only four hair colors: red, blonde, brown, and black – with hundreds of shades in each color category.  These hair color categories will either be rare or common when looking at the global population as a whole.

Most people will dye their hair at some point to look different, but should you try and look different if you have a rare hair color?  In this article, we will explore the rarest hair colors in the world.  All statistics are taken from trusted sources but are still approximated, it’s impossible to survey all 7.753 billion people on the planet. 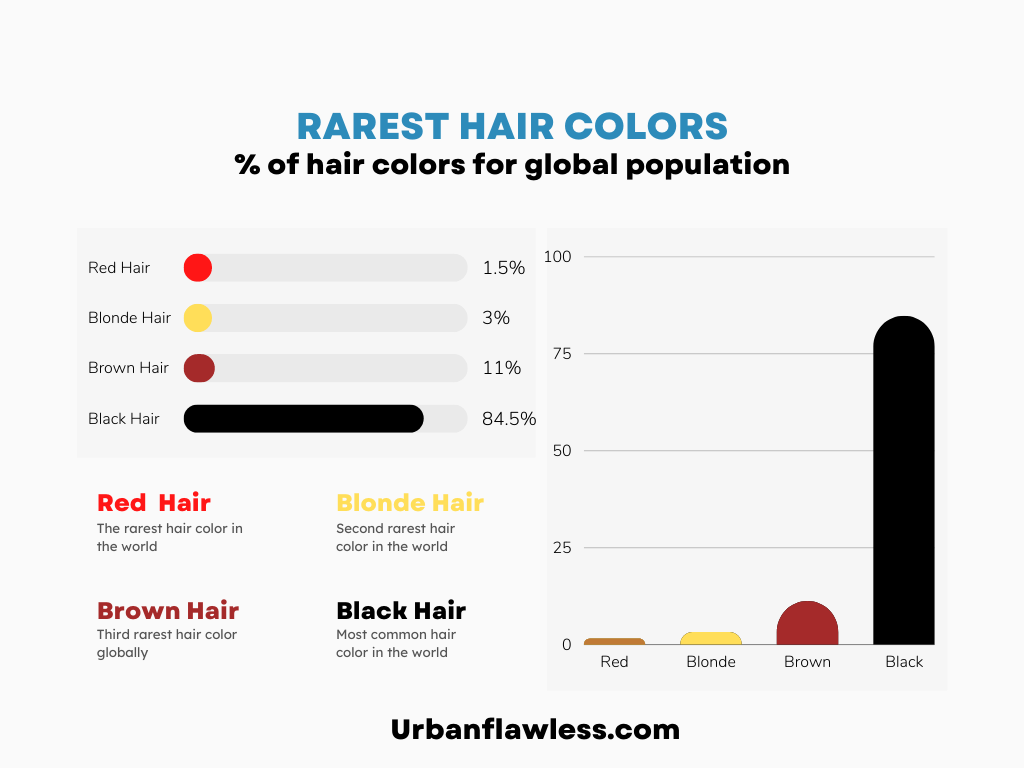 Red hair is the rarest of all hair colors, with only 1-2% of the world’s population having the gene (melanocortin 1 receptor (MC1R)) responsible for red hair.  Redheads are mainly found in the northern hemisphere, with higher concentrations in Northern Europe with people of Celtic heritage.

Within dark-haired populations, you still get pockets of redheads like the Berber populations in north Africa and the Kipchak ethnic group in Central Asia.

The are many redhead celebrities who are proud gingers and famed for their red hair: Ed Sheeran, Rupert Grint and Nicole Kidman, and Lindsay Lohan being good examples of cute gingers.

In the medieval period, it was believed that red hair was a mark of beastly sexual desire and moral degeneration. During the middle ages, they were thought to be witches, werewolves or vampires.

If you have blond hair, consider yourself lucky as only 3% of the world population has this color.  The majority of people with blonde hair are found in America and Northern Europe and are likely to have a light skin color, though there is a high percentage of blondes per capita among Polynesian natives.

The highest amount of people with blonde hair per capita is found in the Nordic countries and Eastern Europe. Our infographic below shows the percentage of blondes by population. Note, not all be archetypal ‘strawberry blondes’, but a variety of blonde-haired people that include ash-blonde, blonde/flaxen, dirty blonde, golden blonde, honey blonde,  platinum blonde, and sandy blonde.

For centuries blonde hair has been associated with beauty; the Greek goddess Aphrodite, Norse god Sif and even the virgin mary are said to have had blonde hair.

With the number of natural blondes being so low per capita, the majority of people you see with blonde hair are likely to be ‘bottle blondes’ – they dye their hair with bleaching products.

Did you know that there’s a high percentage of men that prefer blonde hair ladies? Studies show that most men think that girls with blonde hair are more attractive, healthy, and youthful.

Brown hair color is most common in America, Europe, and Canada. It is also found in some parts of Asia but only a smaller amount per capita. 10-11 percent of the world population have brown hair color. Although it has a small percentage of people have this hair color, it’s the most demanded color because it looks elegant and can have an amazing shine.

Having natural brown hair is a gift when you are surrounded by people who have black hair and some may even envy you because you don’t have to dye your hair, which can cause hair damage.

Brown hair is also called ‘brunette’ which originated in the french word “brunet” which means “brown-haired”. This term was derived from the Proto-Indo-European root (the common ancestor of the European language family). As the meaning became modernized, It has been typically known or referred to as a woman who has brown hair.

Black hair is the most common hair color on the plant with 75% – 85% having this color.

With black hair being so common in Asia, it stands to reason why there is a huge market for hair dye as people want to stand out and be different.

Did you know that in history, a tribe should have a specific hairstyle? In the early era of African-American culture, your hairstyle identifies your standing in their society. When a man or a woman doesn’t do their hairstyle, they are assumed that they are mentally ill. This tradition was stopped and new definitions for hair were applied. (Source: Untangling The Roots of Black Hair in America)

Gray hair naturally occurs when people age and usually starts at around 30-40 years of age. Hair follicle cells start to dye and the production of melanin is reduced; melanin cell pigment that gives hair color.

There are also some youngsters who experience having gray hair. This is usually because of their genes. For some, the cause is unhealthy habits and uncontrollable stress.

Smoking causes hair follicles to shrink and die that’s why people who have a habit of smoking are more prone to having gray hair even at a young age.  We should then learn healthy habits to maintain our youthful look.

Hair is a living accessory organ. It comprises thousands of pigments, each with its chemical composition and structure. The way pigments combine to form the various shades in human hair ranges from simple (black or brown) to complex (red and blue). How hair turns into different shades depends on the interaction of three main factors:

This pigment is known as Melanin. Ideally, hair color depends on the melanin content of the hair. Melanin is produced by the epidermal cells and is responsible for skin and hair pigmentation. Here is what you should know about hair color formation.

What is melanin and how does it determine hair color?

Melanin is the primary pigmented protein in hair. Melanin production in human skin is highly dependent on exposure to ultraviolet radiation. Hair color starts as a mixture of melanin granules and proteins, which are then polymerized into a solid matrix that provides strength and durability to the hair shaft.

The production of Melanin begins with exposure to ultraviolet (UV) light. This causes activated tyrosine amino acids within keratinocytes (the cells that makeup skin) to bind with enzyme complexes called tyrosinase, dopachrome tautomerase, and eumelanin synthase. These enzymes produce various pigments such as pheomelanin, eumelanin, and phaeomelanin from precursor molecules known as dopaquinone or phytochrome B(1). 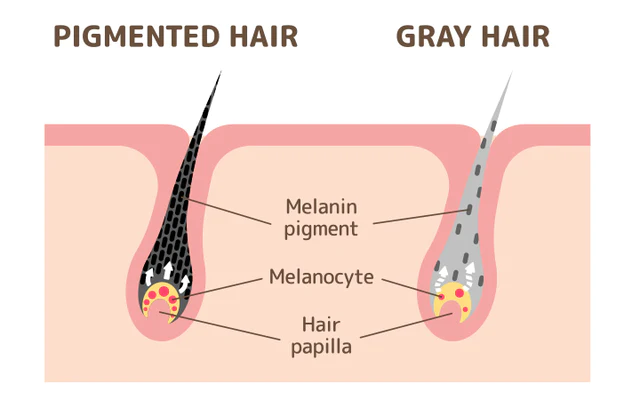 The process of hair color is complex. It involves the interaction of many genes in each person’s genome, and the result can vary widely depending on which genes are expressed in a given cell. Hair color is determined by genetic inheritance. The process of hair coloration involves three major steps: melanin production, melanocyte migration, and melanocyte activity. Here’s a brief breakdown of the process:

The first stage is called the “primary” or “initial” hair color. This stage is determined by the pigments in our skin, which are generally white or yellow. During this stage, Melanin is a filter for ultraviolet rays that enter the skin. Melanin absorbs these rays, turning them into red or blond hair.

Melanin production results in the deposit of melanin granules in the hair shafts. Melanocytes are specialized cells in the hair follicle’s inner root sheath. They produce Melanin, a dark pigmented pigment that imparts color to hair.

At first, the keratin in the hair follicle is converted into Melanin. This occurs in a very thin layer called the stratum germinativum, located at the hair shaft’s bottom.

Next, Melanin begins to build up on top of itself in layers called melanosomes. Finally, melanocytes (cells that produce Melanin) multiply and differentiate into smaller clusters known as mitoses. These cluster formations are called aggregates; they are made up of many different types of specialized cells for their specific function within the body’s immune system.

There are three basic types of hair color: red, brown, and blonde. Each has its own gene set that controls pigment production, although the exact combinations that make up these colors vary from person to person.

Hair color is determined by a family of genes that acts like a master switch. When turned on, the gene produces a protein that can turn the hair white (called SLC45A2) or black (called SLC45A1). When this gene is active, it produces an enzyme called Melanin. Melanin binds to DNA and changes the activity of SLC45A2 genes when it is produced. The result? Blond hair!

Red hair is caused by two recessive red-hair genes, MC1R and MC2R. The MC1R gene codes for melanocyte-stimulating hormone receptor 1, which triggers pigment production in cells called melanocytes. They are located at the base of the hair shaft. When someone has both copies of this gene, his or her hair is normally dark brown or black; if he or she has just one copy of this gene, his or her hair appears red or strawberry blonde.

Brown hair is caused by two dominant brown-hair genes: SLC45A2 and SLC46A1. These genes code for two different versions of a protein called tyrosinase, which converts tyrosine into dihydrochloride (DHC), a chemical responsible for making skin reddish or brownish.

Other factors that determine hair color

Yes, the environment helps determine the color of your hair. For example, you may develop fair skin and light-colored hair if you live in an area with lots of sun exposure. Suppose you spend a lot of time indoors; the pigments in your skin fade and cause your hair to turn gray. This is because sunlight triggers the production of Melanin in your skin cells, which then transfers to your scalp and causes it to become darker over time.

As we age, our bodies produce less Melanin than when we were younger. This means that our hair becomes lighter over time because less Melanin is produced at the same rate as before.

What is the rarest hair color?

Red hair is the rarest of all hair colors, with only 1-2% of the world’s population having the gene (MC1R) responsible for red hair.

What is the most common hair color?

The most common hair color in the world is black, with around 80% of the world population having this color.

What are the rarest hair color and eye combination?

The rarest hair and eye color combination is red hair and blue eyes as both require recessive gene traits.

How Long to Leave Dye in Hair for Best Results?

How To Make Your Hair Grow Faster The Natural Way